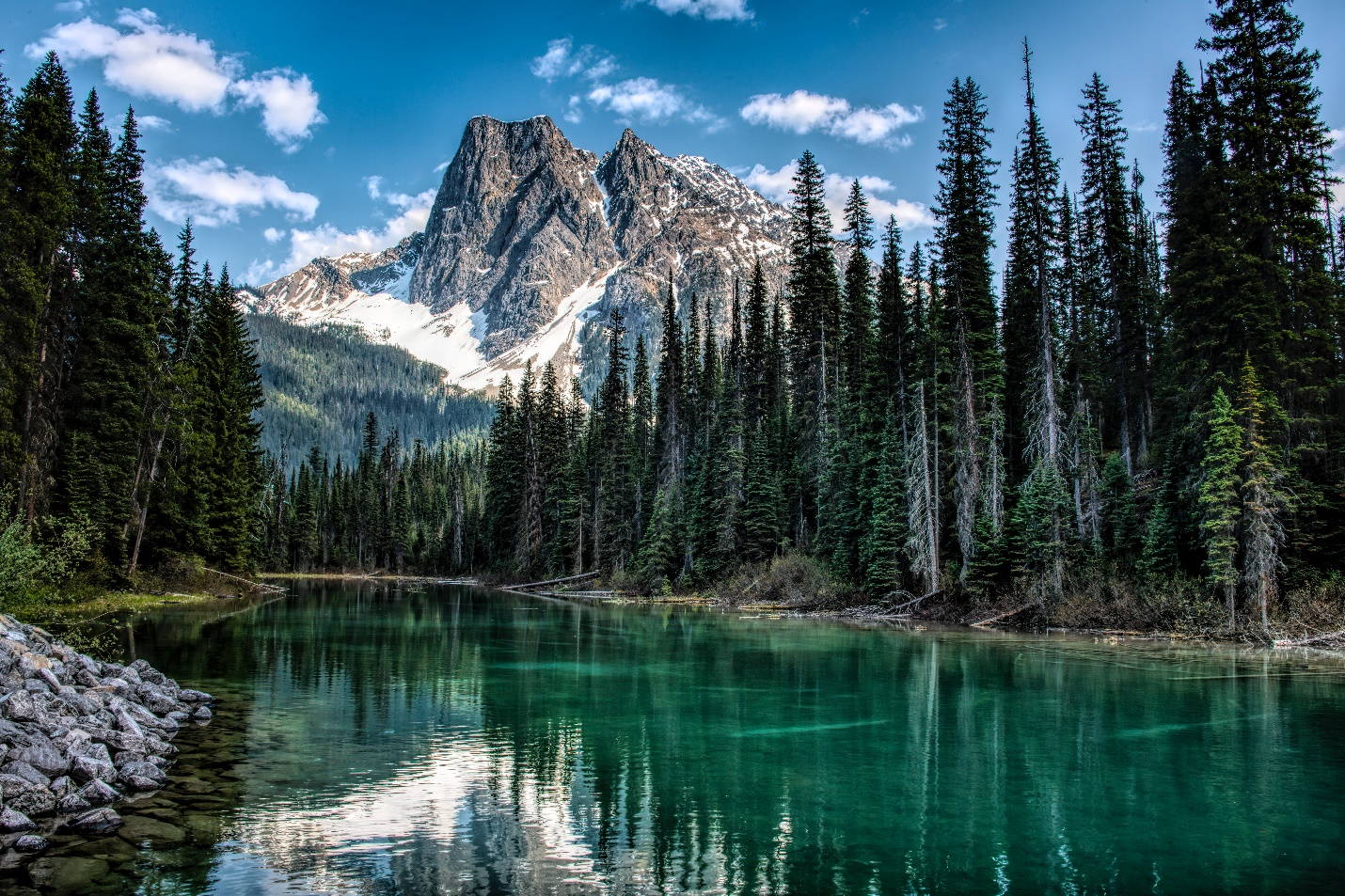 Top 13 Places to Visit in Canada

Sitting along the North Pacific Ocean is Canada’s Westernmost province, British Columbia. Where the trees are the tallest in the country, you’ll find yourself winding up and down roads and through thickets of trees in this province. Whether a new visitor, recurring visitor or permanent resident you’ll always find something to drop your jaw at.

A little after the Ice Age is when the Indigenous tribes began settling along the western coast; carbon dating shows their existence on these lands 6-8,000 years ago.

Their villages contained anywhere from 200 to 1,000 citizens and often used the woods around them to build houses.

If you’ve ever wondered who invested the totem pole, these tribes are the most renown for building them. They are also the tribes who established what is called a potlatch. Tagish, Tsimshian, Tlingit, Kwakiutl, Haida, Nootka inhabited the coastal regions while the Interior Salish, Carrier and Kootenay were more nomadic in their homesteads.

A potlatch is a ceremonial feast held by Indigenous peoples. It’s very important to their culture, spirituality and governing structure. However, from 1884 to 1951 the federal government of Canada banned the potlatch in the Indian Act (amendment). The reason behind it? It was seen as reckless, wasteful and anti-Christian.

B.C. was the last part of Canada to be explored by the Europeans. Mostly due to the vast distance from the rest of the land, and the rugged terrain to cross.

The gold rush in 1858 brought thousands of hopefuls flocking to the Lower Fraser River. 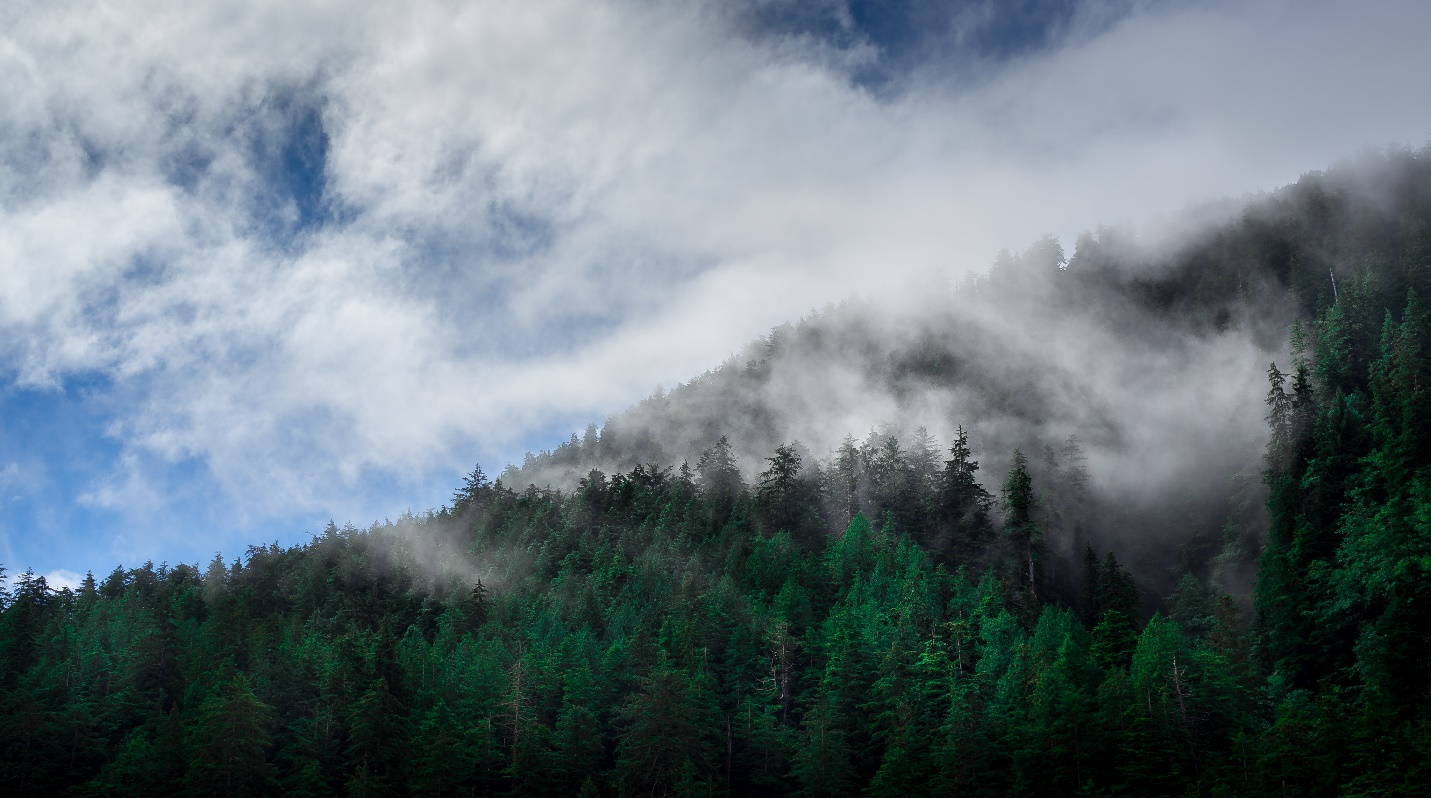 Once called the Queen Charlotte Islands, the archipelago is now called Haida Gwaii which can be translated into “islands of the people.” It was changed as a means of acknowledging the Haida Nation, and part of the reconciliation agreement between them and British Columbia.

There are 150 islands to explore, though getting there could be a touch more troublesome. The water way, Hecate Strait, can be rather disloyal to its passengers. The wind alone can carry an adult human straight up, while the waves can reach 90 feet tall. The best way to reach the archipelago is by propeller plane, though you may also catch a ferry.

Xhaaidlagha Gwaayaai is the originating name, however, and is considered the origin of time in Haida legends. The mix of terrain is astonishing, going from snow capped mountains and fjords descending into the ocean all the way to sandy beaches and forests divine.

On Graham Island, the largest of the islands, is the fishing Village of Masset. From here, hikers will find wide assortments of trailers to explore.

Only 26-kilometers east is Tow Hill and Blowhole trails. Designed for those with mobility issues, the boardwalk follows the Hiellen River before reaching Cape Fife Trail.

This trail is about 10-kilometers each direction, so be prepared for a few hours of hiking. This one is from a settler’s path back in the day. You’ll also get to see the forest shift, as if in a storybook, as it goes from one type of tree to another.

Golfers can pick up their clubs here too with the Dixon Entrance Golf and Country Club. The nine-hole course sits about five-kilometers east of Masset. Entirely run by volunteers, the club is open April to October. 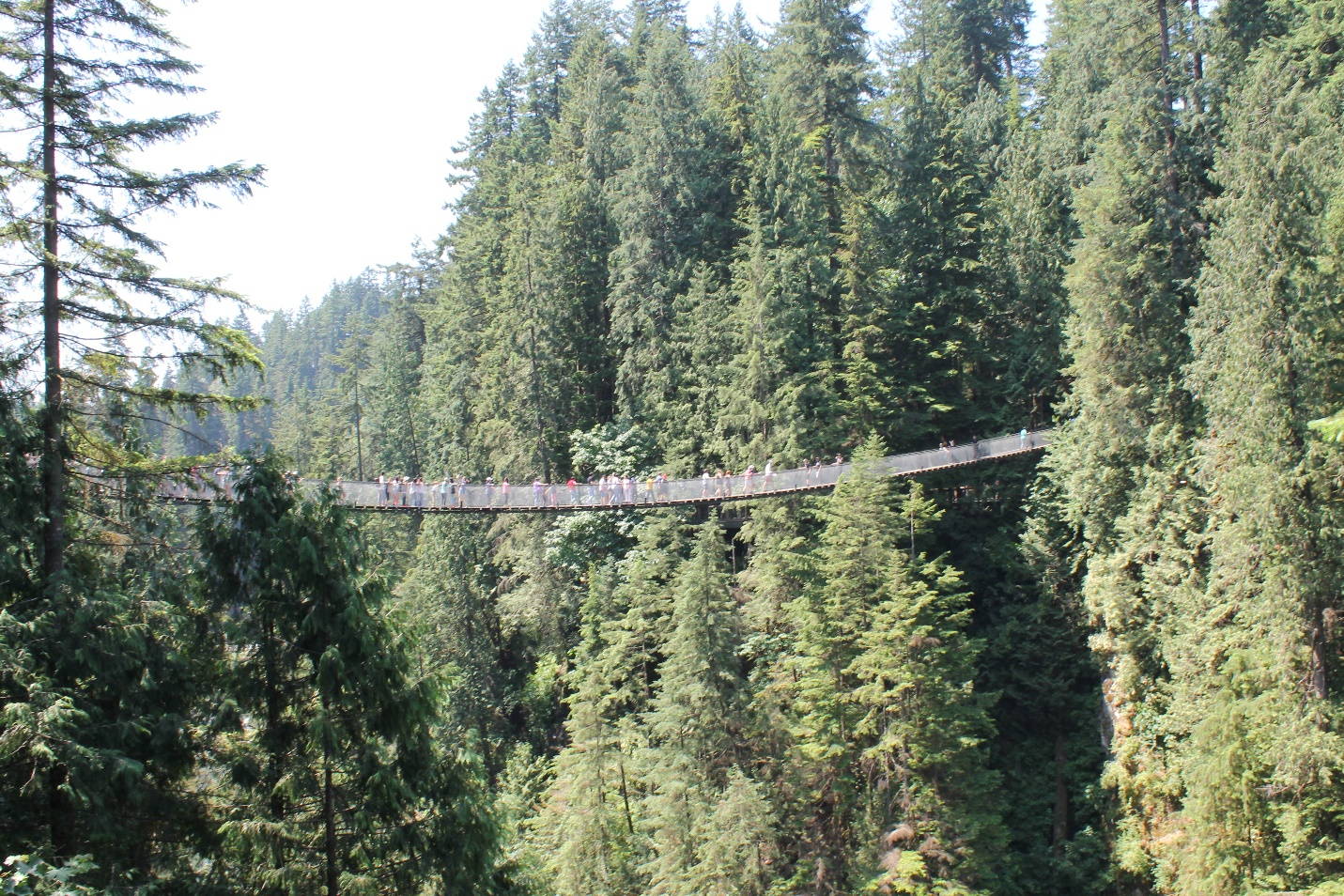 If you prefer staying on dry land, then a 130-year-old bridge is the place to cross. Maybe the actual bridge isn’t on dry land and hangs over the air… but it’s connected to it.

The name derives from the Squamish Nation and means “beautiful river.” Of course, the change in spelling was anglicised but become the known name of the famous bridge.

In 1888, Scotsman George Grant Mackay arrived in Vancouver and purchased 6,000 acres of dense forest. As it goes, he built the bridge and used horses to cross the river with the rope and attached it to the other side of the cliff. The bridge was changed out with a wire cable bridged in 1903 after his death.

Also arriving in 1888 was Edward Mahon, though he was a miner in a different area. He ended up purchasing Capilano Suspension Bridge when he bought land along the North Shore. Mahon had the tea house built in 1911, and reinforced the bridge with further wire cables in 1914.

The bridge was sold yet again in 1934 to Mac Maceachran, who invited the Indigenous to install their totem poles to the area. Once more, the bridge traded hands and found it’s way to Henri Aubeneau in 1945, but in 1953 another man purchased the property and rebuilt it 1956 before creating trails on the west side of the bridge and converting tea area to a gift store.

The latest owner has held onto it since her purchase in 1983 and has seen huge success in turning the space into a landmark destination for locals and tourists. The modern tourist will find themselves milling the gift store loaded with items for children through adults. 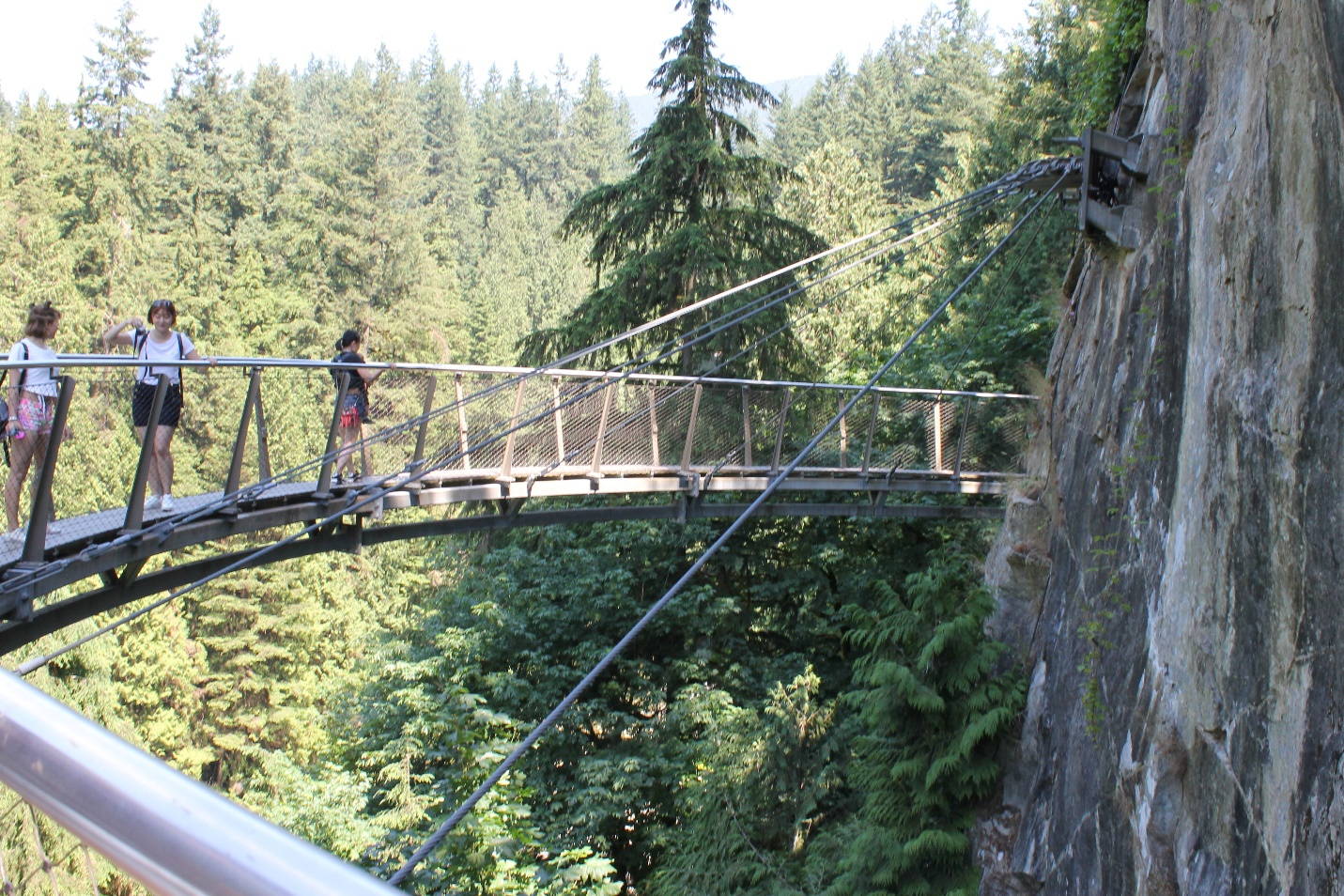 Then take the cliff walk, bolted and secured to the side of the cliff and bubbling out over the river itself before climbing back up the walk and toward the main property.

Cross the bridge, 230 feet above the river, can take the average person six-seven minutes to cross the 450 length of swinging boards and cables.

On the other side you’ll discover drink huts and seating arrangements, educational shows with wild animals (such as the falcon or eagle), and tree top climbing. The runways of spiraling walkway overhead the earth is a magical world that brings to mind the word: fairies.

You can support Indigenous communities by resting your head at one of their supported hotels, lodges or resorts. For Haida Gwaii, stay at the more local hub Gwaii Naay Island House. It’s close to Old Masset, has WIFI and a shared lounge along with seven comfortable rooms to spend the night.

In Vancouver, stay at Canada’s very first Indigenous arts hotel, Skwachàys Lodge! Because it’s the first of its kind, you’ll be delighted walking through its doors and see the tales of old decorating the building. Each of their rooms is unique and tells the story of the Indigenous culture, created by First Nations artists and Vancouver-based interior designers.