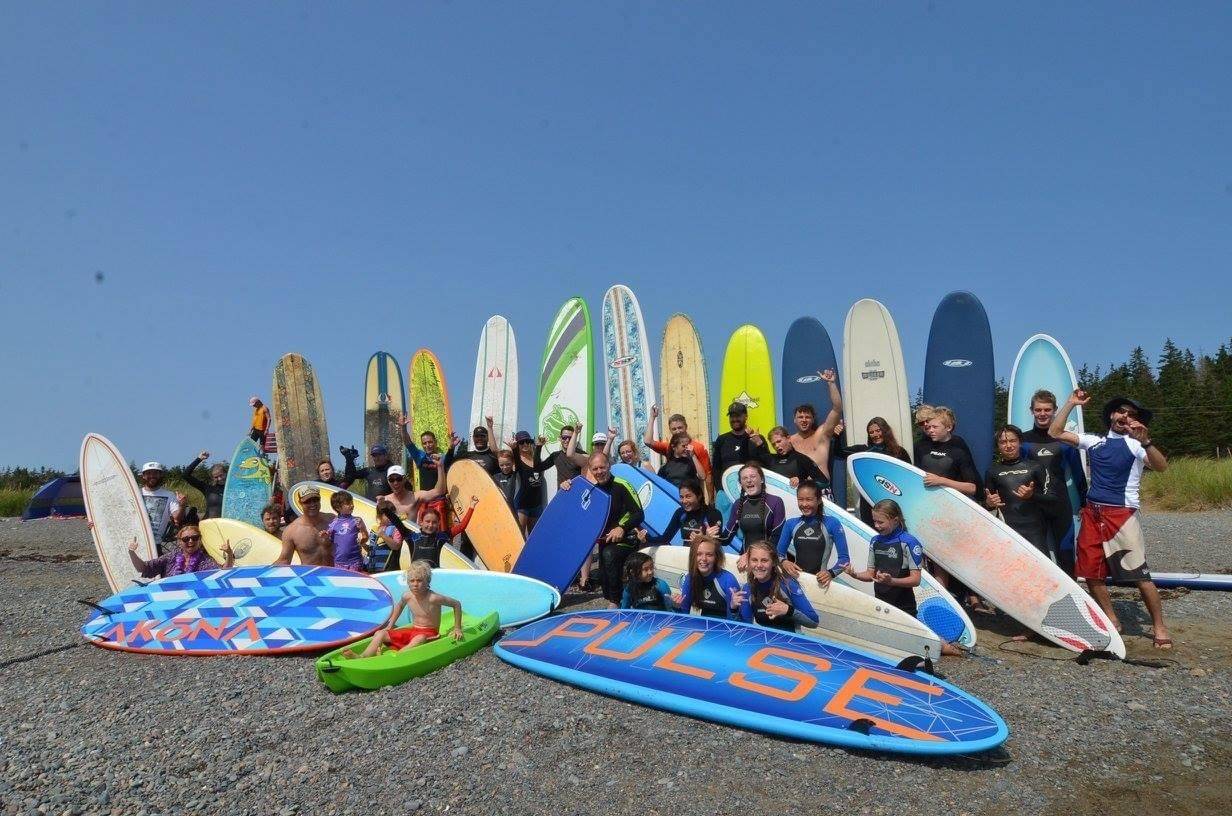 Summer is here and vacation time is around the corner. For those wanting to scale it down to perhaps a more affordable getaway, Point Michaud may be a great destination. But leave your cell phone behind. There is no Internet access on the shores of this Cape Breton three-kilometer sandy beach.

What you will find however, are hundreds of tourists and residents who come each year to surf. That’s right, surf’s up!

The wind driven swells can reach as high as 10 feet depending on the season and weather. Founder of this grass roots surf club, Michelle Richards, says it has become the best East Coast location for summer surf programs.

“The energy and healthy lifestyle drew me in,” Richards admits.

After a few months, she returned to Cape Breton where her parents purchased a waterfront house on Bras d’Or Lake in Cape Breton. For days she would go out on the inland water strengthening her arms and endurance. The next part was learning how to get out to the waves. At the time, a local Halifax surf shop recommended Richards sign up for the 2002 Canadian Surf Association contest. The waves were huge outside Lawrencetown Beach and the reason she did so well was because of her hours of practice.

“I placed second in the women’s division and top novice over all.”

Richards accepted a teaching position in the Municipality of Richmond, Cape Breton. With four boards in the back of her station wagon, she met a few locals for their first lesson and thus sparked the surf program.

Without wet suites the children didn’t last long in the water. Thankfully, the town has since purchased them for all ages and sizes and boards to fit competency levels. They erected a facility to house their wares and have officially become Cape Breton’s destination for surfing. 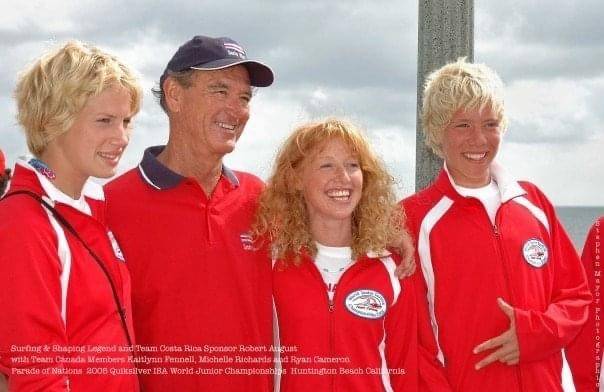 But don’t look for fancy restaurants, or exclusive shopping boutiques. Instead, one can get back to nature with fun on the surf and then relax with a home-cooked dinner by a campfire. Family and friends arrive for the day, while others stay for weeks in trailers and tents at Battery Provincial Park or use nearby accommodations.

Surf lessons used to be once-a-week, but demand has the instructors out five-days-a-week. These instructors were the very children Richards taught in the initial startup operation and well, she learned from the best.

It was while Richards was coaching the Nova Scotia hometown juniors at the International Surf Association’s (ISA) junior games that she met Robert August on Huntington Beach, California and became close friends quickly.

“He offered me to stay at his place on the beach for two months while he was in Costa Rica.”

During that time, she competed in the international women’s longboard competition on San Diego’s Ocean Beach, where Richards met Denny Aaberg who offered his mentorship. For two months he showed her surfing spots up and down the coast and deepened her familiarity to the culture and sport. 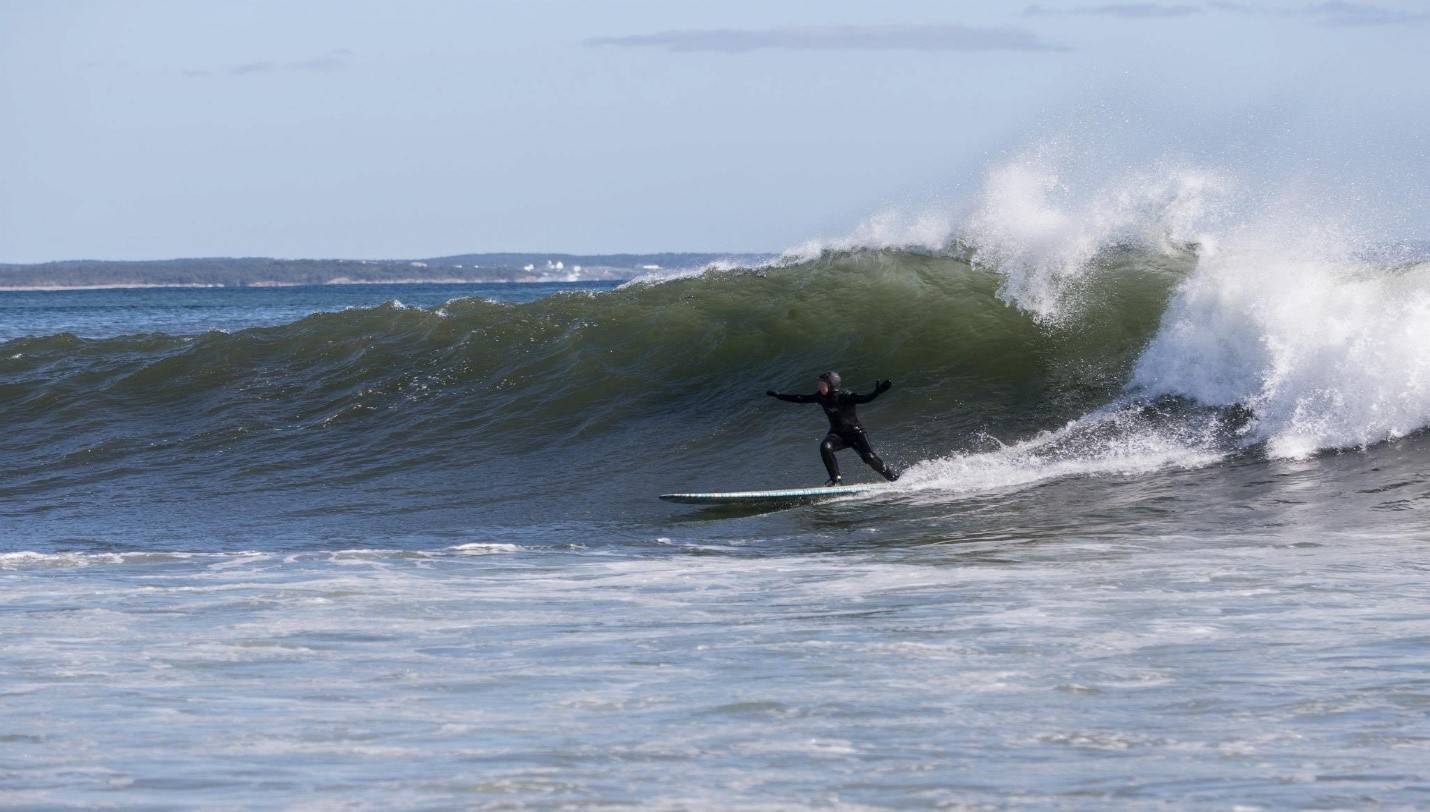 A Move to Mexico

Returning to Cape Breton after a few months, Richards spent the rest of the summer honing her craft in anticipation of the ISA world surfing games hosted on Huntington Beach. During the contest, she became good friends with the Mexican team. By the end of the event, they were swapping contact numbers and figuring out how Richards could teach in Sayulita, a small village of 5,000 people, approximately 30 miles north of downtown Puerto Vallarta.

She lived there for four years attracting visitors to the village for lessons and meeting strong female surfers out of Tofino, British Columbia.

Richards returned to work with the surf program in 2006 at Point Michaud and introduced the Unama’ki First Nation community children to their own surf program. Together, they met on the shores each week without cell phones, all wearing wet suites and ready for lessons.

Comparing the waves to those she has surfed around the world Richards says they are without a doubt, “the safest most user-friendly waves I have ever come across.”

“It is just sand bar after sand bar. The waves come in and slow down across the bars so there is no shore pound. They are just mellow waves that create a great surf steam.” 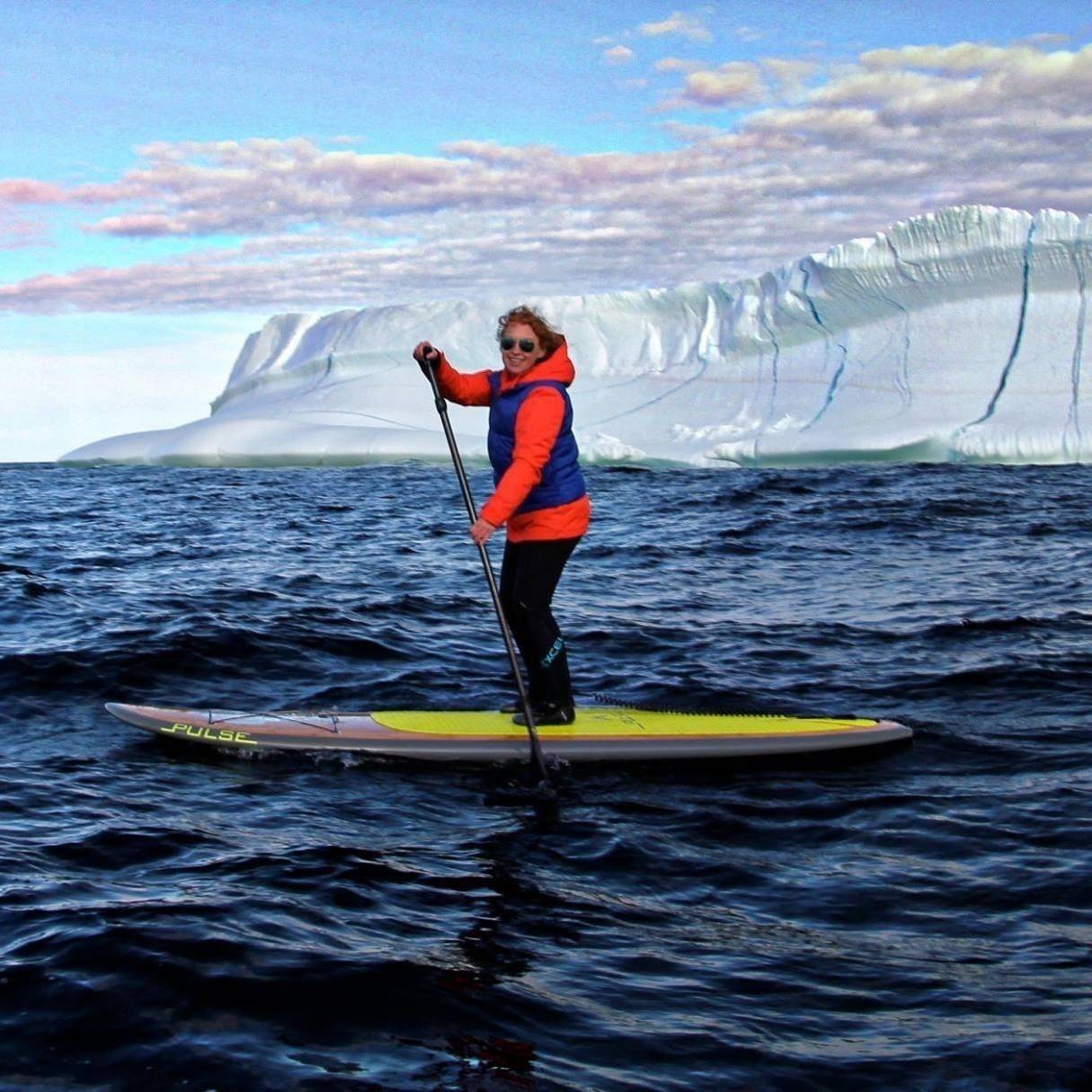 Nearing the end of the season a surf contest consisting of various boards, surf boards, boogie boards, kayaks, “anything that will ride a wave” is organized. It still is the longest running surf contest in Canada. 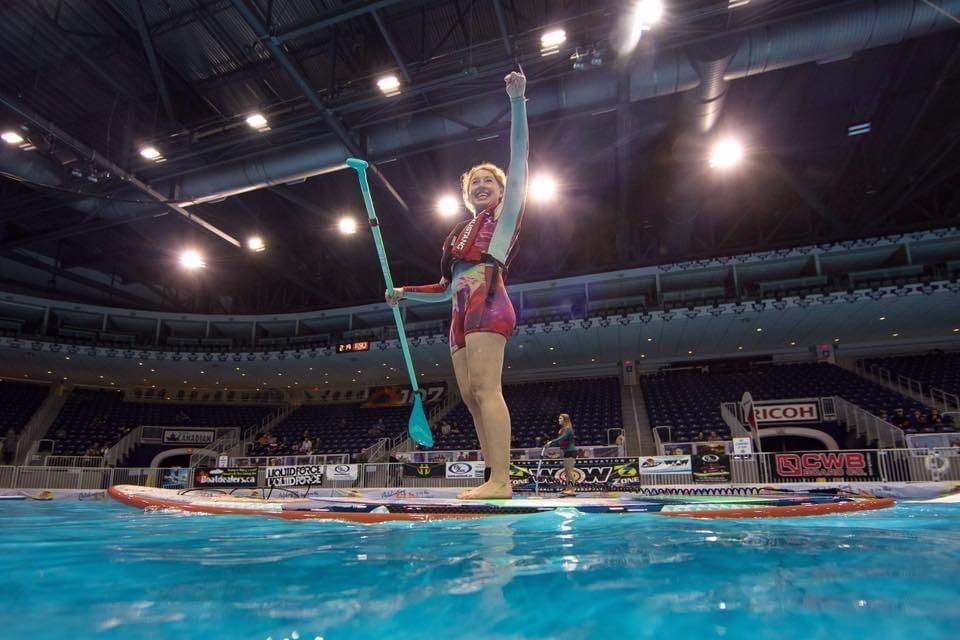 Stand up paddle board races at the Toronto Boat Show

Richards has accepted a location change as a watersports’ distributor. She is now in Moncton, New Brunswick but keeps in touch with residents in Richmond, specifically the Unama’ki people. Up until last year, she was riding the tidal bore, the longest wave in the world on the Petticodiac River in New Brunswick.

“I wouldn’t recommend this to anyone. A lot can go wrong very fast.”

A tidal bore, according to https://www.experiencemoncton.ca/article/tidal-bore-moncton, is a tidal wave in which the leading edge of an incoming tide (in this case from the Bay of Fundy) forms a stand wave of water that travels upstream against the flow of the river.

When she is not on the water, Richards is traveling along the Atlantic Coastline instructing on paddle and surf boards.

If you are interested in traveling to Point Michaud for a surf lesson or two, or perhaps enjoy rest and relaxation, please call the Municipality of Richmond for more details. http://www.richmondcounty.ca/surfing.html 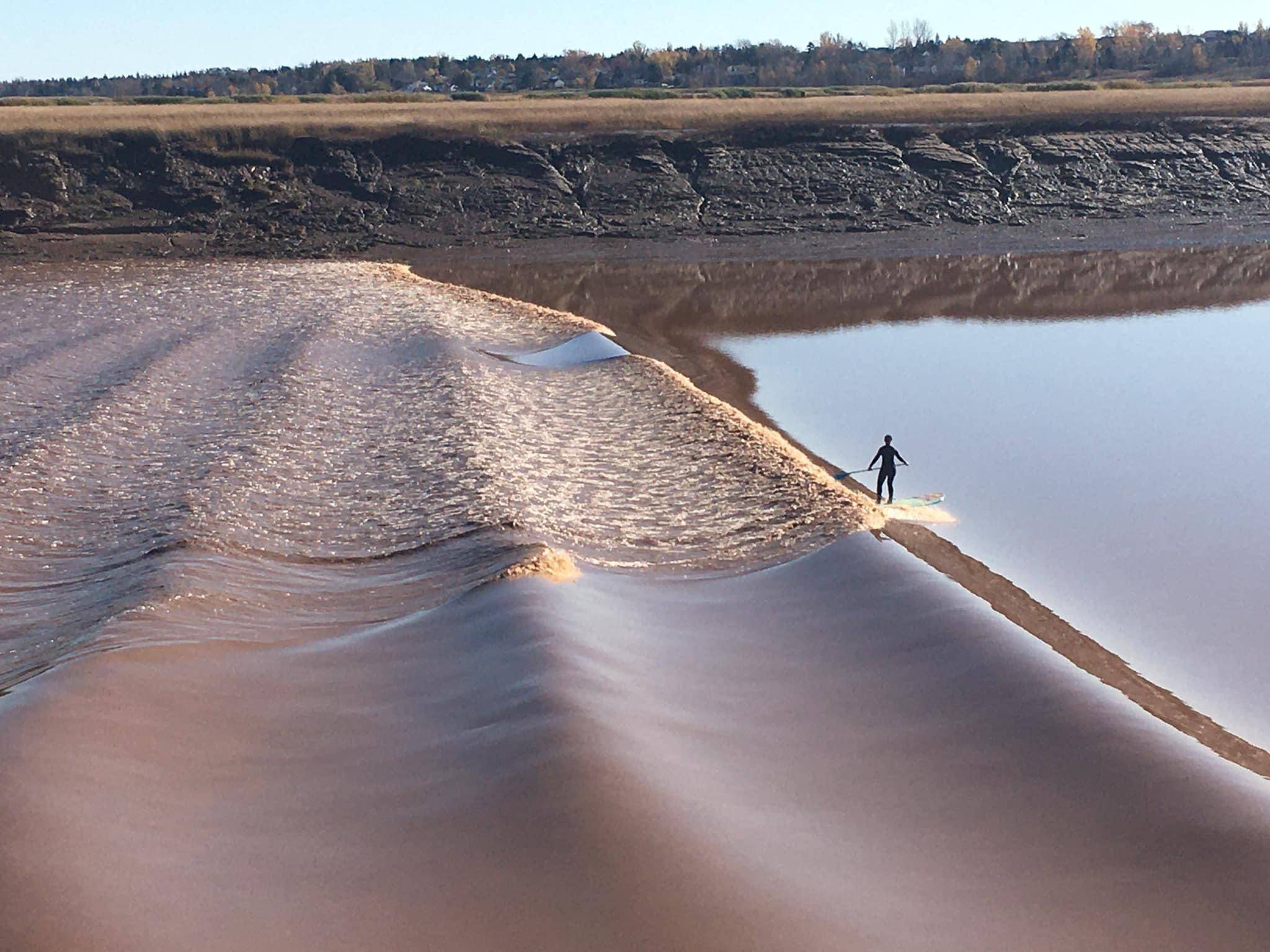